Amazon is currently testing out a program that would let brands send free samples to its customers, with the recipients targeted based on their browsing and purchasing history. The program extends to both Prime and non-Prime Amazon shoppers, and will largely feature consumer packaged goods (CPGs) like nonperishable grocery items and beauty products.

Amazon’s assault on the digital ad duopoly is being helped by its trove of first-party data, along with consumers’ increasing proclivity to kick off their paths to purchase by searching the ecommerce platform.

Those advantages are drawing the attention of marketers around the world. According to an October 2018 survey from Third Door Media, more than one-third of marketers worldwide said they already spent between 10% and 25% of their digital ad budget on Amazon advertising. And about one in 10 respondents said they spent between 25% and 50% of their budgets on the platform. 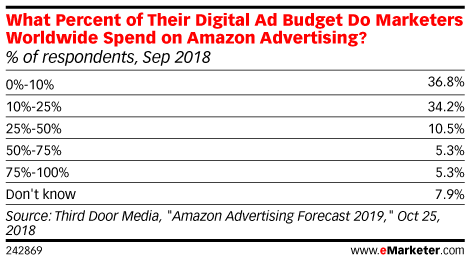 “One of the biggest reasons to advertise on Amazon is the size of its audience, along with that audience’s propensity to purchase. Amazon visitors are already in shopping mode—not just receptive to product messaging, but actively looking for it. ” wrote eMarketer Senior Analyst Nicole Perrin in the September 2018 eMarketer report, “Amazon Advertising 2018: The New No. 3 US Digital Ad firm.”

Perrin noted that Amazon’s ability to capture even more ad dollars will increase as it expands its ad offerings and improves its digital ad buying interface.

It’s no accident that Amazon’s new free samples program appears to be focused on CPG—it’s a product sector that’s home to some of the biggest brand ad spenders around.